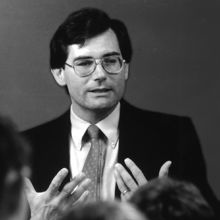 Michael J. Healy is Professor of Philosophy at Franciscan University of Steubenville, where he served first as chief academic officer (1986-2000), during which time the philosophy department grew from 2 to 7 professors and from 2 majors to 200, making it the largest undergrad philosophy department in the country. In addition, an MA philosophy program was initiated and is going strong. He received his BA in Philosophy and Psychology from Loyola University of Los Angeles, studying under Dr. Ronda Chervin, and his MA and PhD from the University of Dallas, studying under Dr. Josef Seifert and Dr. John Crosby. He is especially interested in personalist and existential thought. His primary philosophical inspirations have been Dietrich von Hildebrand, Soren Kierkegaard, John Henry Cardinal Newman, and Karol Wojtyla (JPII). He is married to his Austrian wife Maria (from Innsbruck) and they have five children.