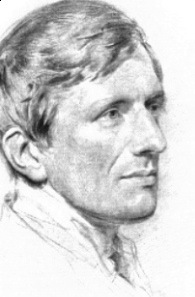 On August 11, 1890, John Henry Cardinal Newman died in Birmingham, England, where he will be beatified next May. The words on his tombstone: “Out of the shadows and into Reality.”

Among my favorite of his sermons is On the Greatness and Littleness of Human Life.

Read at least these two paragraphs, if you haven’t got time for the whole beautiful thing. They give us a taste of the absolute joy he must have experienced on that day 119 years ago, and of how he had yearned for it his whole long life. They also give a feel for his profound personalism.

This is from the early part, leading the congregation toward a more vivid sense of the fleetingness and relative insubstantiality of our earthly existence.

And this sense of the nothingness of life, impressed on us by the very fact that it comes to an end, is much deepened, when we contrast it with the capabilities of us who live it. Had Jacob lived Methuselah’s age, he would have called it short. This is what we all feel, though at first sight it seems a contradiction, that even though the days as they go be slow, and be laden with many events, or with sorrows or dreariness, lengthening them out and making them tedious, yet the year passes quick though the hours tarry, and time bygone is as a dream, though we thought it would never go while it was going. And the reason seems to be this; that, when we contemplate human life in itself, in however small a portion of it, we see implied in it the presence of a soul, {216} the energy of a spiritual existence, of an accountable being; consciousness tells us this concerning it every moment. But when we look back on it in memory, we view it but externally, as a mere lapse of time, as a mere earthly history. And the longest duration of this external world is as dust and weighs nothing, against one moment’s life of the world within. Thus we are ever expecting great things from life, from our internal consciousness every moment of our having souls; and we are ever being disappointed, on considering what we have gained from time past, and can hope from time to come. And life is ever promising and never fulfilling; and hence, however long it be, our days are few and evil. This is the particular view of the subject on which I shall now dwell.

And this from the penultimate paragraph:

To those who live by faith, every thing they see speaks of that future world; the very glories of nature, the sun, moon, and stars, and the richness and the beauty of the earth, are as types and figures witnessing and teaching the invisible things of God. All that we see is destined one day to burst forth into a heavenly bloom, and to be transfigured into immortal glory. Heaven at present is out of sight, but in due time, as snow melts and discovers {224} what it lay upon, so will this visible creation fade away before those greater splendours which are behind it, and on which at present it depends. In that day shadows will retire, and the substance show itself. The sun will grow pale and be lost in the sky, but it will be before the radiance of Him whom it does but image, the Sun of Righteousness, with healing on His wings, who will come forth in visible form, as a bridegroom out of his chamber, as His perishable type decays. The stars which surround it will be replaced by Saints and Angels circling His throne. Above and below, the clouds of the air, the trees of the field, the waters of the great deep will be found impregnated with the forms of everlasting spirits, the servants of God which do His pleasure. And our own mortal bodies will then be found in like manner to contain within them an inner man, which will then receive its due proportions, as the soul’s harmonious organ, instead of that gross mass of flesh and blood which sight and touch are sensible of. For this glorious manifestation the whole creation is at present in travail, earnestly desiring that it may be accomplished in its season.

I had never read anything by Newman, previous to your post, and know nothing of him.  Was he a poet, as well?  He writes with an eloquence and light usually not found in prose. I found him quite beautiful.

Teresa, have you considered taking our class on Newman?  Please do.  You would love it.  (Money-back guarantee!)

He’s considered by some the greatest prose writer in English.  A prominent non-believing contemporary of Newman’s (Matthew Arnold perhaps?) used to memorize whole sermons of his for their beauty and rhetorical power.  He was also a poet.
His most famous poem, which has become a favorite hymn in England, is The Pillar of the Cloud.

The Pillar of the Cloud

LEAD, Kindly Light, amid the encircling gloom
Lead Thou me on!
The night is dark, and I am far from home‚Äî
Lead Thou me on!
Keep Thou my feet; I do not ask to see
The distant scene‚Äîone step enough for me.

I was not ever thus, nor pray’d that Thou
Shouldst lead me on.
I loved to choose and see my path, but now
Lead Thou me on!
I loved the garish day, and, spite of fears,
Pride ruled my will: remember not past years.

So long Thy power hath blest me, sure it still
Will lead me on,
O’er moor and fen, o’er crag and torrent, till
The night is gone;
And with the morn those angel faces smile
Which I have loved long since, and lost awhile.

He also wrote many incredibly beautiful and deeply personalistic prayers and meditations.  Here is one I love especially:

“God has created me to do Him some definite service; He has committed some work to me which He has not committed to another. I have my mission‚ÄîI never may know it in this life, but I shall be told it in the next. Somehow I am necessary for His purposes, as necessary in my place as an Archangel in his‚Äîif, indeed, I fail, He can raise another, as He could make the stones children of Abraham. Yet I have a part in this great work; I am a link in a chain, a bond of connexion between persons. He has not created me for naught. I shall do good, I shall do His work; I shall be an angel of peace, a preacher of truth in my own place, while not intending it, if I do but keep His commandments and serve Him in my calling.

Therefore I will trust Him. Whatever, wherever I am, I can never be thrown away. If I am in sickness, my sickness may serve Him; in perplexity, my perplexity may serve Him; if I am in sorrow, my sorrow may serve Him. My sickness, or perplexity, or sorrow may be necessary causes of some great end, which is quite beyond us. He does nothing in vain; He may prolong my life, He may shorten it; He knows what He is about. He may take away my friends, He may throw me among strangers, He {302} may make me feel desolate, make my spirits sink, hide the future from me‚Äîstill He knows what He is about.

O Adonai, O Ruler of Israel, Thou that guidest Joseph like a flock, O Emmanuel, O Sapientia, I give myself to Thee. I trust Thee wholly. Thou art wiser than I‚Äîmore loving to me than I myself. Deign to fulfil Thy high purposes in me whatever they be‚Äîwork in and through me. I am born to serve Thee, to be Thine, to be Thy instrument. Let me be Thy blind instrument. I ask not to see‚ÄîI ask not to know‚ÄîI ask simply to be used.