It didn’t seem quite right to add this to Josef Seifert’s post defending the “freedom” (I can’t help adding the scare quotes) to wear the burqa, but I post it for the sake of making clear the sort of thing I have in mind. No conciliating baby blue this time. 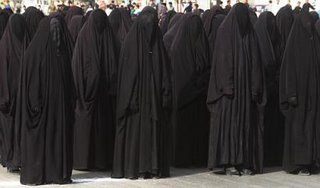 I’ve also just come across an article in today’s Daily Mail [a UK paper] on the subject: a British Muslim woman making the case for banning the burqa in public. I won’t link it directly (because of the racy gossip also featured), but here’s a key passage:

Many of my adult British Muslim friends cover their heads with a headscarf - and I have no problem with that.

The burkha is an entirely different matter. It is an imported Saudi Arabian tradition, and the growing number of women veiling their faces in Britain is a sign of creeping radicalisation, which is not just regressive, it is oppressive and downright dangerous.

The burkha is an extreme practice. It is never right for a woman to hide behind a veil and shut herself off from people in the community. But it is particularly wrong in Britain, where it is alien to the mainstream culture for someone to walk around wearing a mask.

The veil restricts women. It stops them achieving their full potential in all areas of their life, and it stops them communicating. It sends out a clear message: “I do not want to be part of your society.”

Every time the burkha is debated, Muslim fundamentalists bring out all these women who say: “It’s my choice to wear this.”

Perhaps so - but what pressures have been brought to bear on them? The reality, surely, is that a lot of women are not free to choose.

Girls as young as four are wearing the hijab to school: that is not a freely made choice. It stops them taking part in education and reaching their potential, and the idea that tiny children need to protect their modesty is abhorrent.

And behind the closed doors of some Muslim houses, countless-young women are told to wear the hijab and the veil. These are the girls who are hidden away, they are not allowed to go to university or choose who they marry. In many cases, they are kept down by the threat of violence.

The burkha is the ultimate visual symbol of female oppression. It is the weapon of radical Muslim men who want to see Sharia law on Britain’s streets, and would love women to be hidden, unseen and unheard. It is totally out of place in a civilised country.

Precisely because it is impossible to distinguish between the woman who is choosing to wear a burkha and the girl who has been forced to cover herself and live behind a veil, I believe it should be banned.

First off, I would like to thank Jules and Katie for creating the Linde.  What a wonderful forum for (passionately yet civilly) communicating one’s ideas and deeply held convictions.  I have found all the posts and comments truly engaging.

If I may add my thoughts to the burqa thread; I am not so much interested in the debate about whether or not the burqa is ‘attractive’ or ‘feminine,’ as these are merely aesthetic or cultural reactions to what is (to the Western world) largely a foreign fashion.  What I am concerned with is whether or not the burqa implies anything negative about the individual woman wearing it, or about women as a whole.  To me, this aspect is far more intriguing and worthy of discussion.

Fabric has no inherent moral value.  The white poplin that can be made into a wedding gown can just as easily be shaped into the conical hats and costume of the Ku Klux Klan.  The thread that forms the Star of David on the flag of Israel is identical to the thread that went into making the ‘badges of shame’ on the shirts of Jews imprisoned in Nazi concentration camps.  So it is not the fabric or clothing itself, but what it implies about the wearer, that matters.

What does the burqa say about the woman wearing it?  It has been suggested that this ‘total veiling’ is meant to “secure environments where the chasteness and dignity of women may once again be sacrosanct” (Afgan Women under the Taliban, 2001), and, coming from a culture (our own) in which women are objectified, this sounds reasonable and even refreshing.  But, in those places where the burqa has been mandated (officially or not), has the physical wearing of the burqa been the only requirement, or are there other, attendant repercussions?

For example, consider that, under the Taliban’s rise to power in Afghanistan (during which time burqas were required), girls could not go to school past the age of eight, and up until that age they could only study the Qur’an.  Women were not allowed outside their homes without a mahram (non-marriageable male escort), even to buy food or seek aid relief.  Women were not allowed in general hospitals (even as patients), nor could they be examined by male physicians, a situation exacerbated by the fact that all women (including high-ranking female doctors, even neuro-surgeons) were forbidden employment and sent home.  Segregation was evident (segregated seating on buses, for example); and women were forbidden from appearing on TV or radio, or from assembling in public gatherings.  Women were beaten for even minor violations of their strict dress code.  (Continued)

While the wearing of one, particular type of garb is neither here nor there, when coupled with the rest (see previous comment), the wearing of burqas no longer seems to me to be about protecting the dignity of women, but subjugating them.  Again, if it were just the wearing of one particular style of clothing, I might have no objection; but I find the attendant mind-set disturbing.  Are women being covered to protect and honor them, or to remove them entirely from society?

According to one Taliban spokesperson, “the face of a woman is a source of corruption” (Taliban: Ascent to Power, 2000).  Is this truly what is believed?  Are women really such temptresses that only by rendering them shapeless, faceless non-entities can man control his sexual appetite?  I find this hard to believe - and an incredible concession to (what may be some) man’s weakness.  For example, I am pretty (if I do say so myself), but I would be hard pressed to find five men who found me beautiful, and any who thought me a ravishing siren.  Consider the women in your own acquaintance - can you honestly say that any healthy male (of a reasonable hormone level) would find any one of them irresistible?  If a lustful male removes all women from his sight, he is doing nothing to overcome his own disordered desires.  And what does this say about his free will?  It’s like Adam, determined to pick an apple off of the Tree himself, only to find they have all already been plucked and hidden away from him - there is no free will or choice in that.

I recently served as jury foreperson in a criminal trial.  What struck me was how we, as jurors, sat only feet away from the accused.  Many times the defendant would look at us - look directly into our eyes - and, under our Constitution, that was his right, to see us face-to-face, in open court.  For one second, just before reading the verdict, I fleetingly wished we jurors could wear masks or veils of some kind, to render us homogenous, non-distinct, non-recognizable beings.  But then I immediately thought how wrong that would be.  If we were non-entities, without faces, how terrifying that would be.  How inhuman.  How differently might we have related to each other, and how different might our deliberations have been, if we had known we would remain anonymous.  Only by having faces, by being persons (just like the accused was a person), could we ever hope to treat him as such.

In closing, it is not the actual fabric or style of clothing that I object to, but the demeaning mindset that often accompanies the mandated wearing of burqas.  (This does not even touch upon the more recent international security issues surrounding burqas, and the inability to identify dangerous persons erroneously hiding behind the veil).  Women have voices and ideas and contributions to society - and faces - and all must be acknowledged and respected in society.  A world without any visible women - no compassionate nurse by a dying soldier’s beside, no inspiring teacher, no selfless aid worker, no affectionate foster mother or orphange volunteer, no talented and empathetic physician - is a world deprived of half its wonder, half its achievement, half its love.

Great post, Teresa.  Thanks!
You’re right that we haven’t yet even raised the question of burqas and security threats, or other problems for face-covering in free societies, including photo IDs (in passports and driver’s licenses for instance) and jury duty.  There was a case in Michigan this week of a Muslim called to the stand as a witness in a criminal trial refusing to remove her veil.
All such question, while important, seem to me to take a second place to questions of freedom and dignity.  It seems to me that the defense of the right to wear burqas offered by Dr. Seifert and Bill assumes that burqas are freely chosen.  But what if they are coerced?