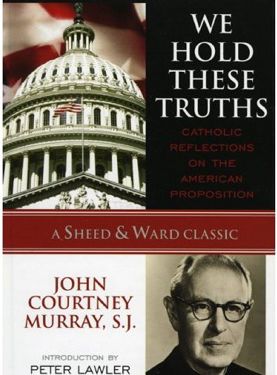 A good article over at the American Spectator today, in honor of the 50th anniversary of the publication of John Courtney Murray’s book of essays, We Hold These Truths.

Murray had a keen intellect, steeped in the classical and Western traditions once common among Jesuits of his stature. He was comfortable arguing politics, theology, national defense policy and history. He challenged assumptions of both the Left and Right. He offered precise and subtle arguments that have been used and, sometimes, misused by both sides in debates over different issues over the years. But his faith in the inherent reasonableness of God and man is a welcome tonic to the corrosive anti-intellectualism, power politics and relativism of the present age.