Saturday evening Jules and I hosted a reading circle gathering centered on Vaclav Havel’s great and influential essay, The Power of the Powerless. The essay deals with the web of lies that had engulfed eastern European society under the domination of communist ideology and Soviet military power—the suffering it caused, and the struggle for truth and freedom that could bring it down.

Havel points out in the essay that the then-state of the east should serve as a warning to the west, which contains within its own alienated, de-spiritualized, consumerist culture the seeds of the same human catastrophe.

One way to arm ourselves for the resistance is to feel our way imaginatively into the nightmare. A great way to do that is to watch movies that bring it vividly to life. Here is a list of my favorites. 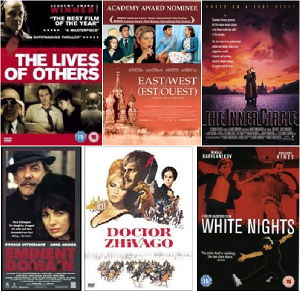 The first three are especially great; alll show the horror of Soviet communism and the triumph of the human spirit in spite of it.

NB: Some of these—the first especially—have some rather raw scenes. Eminent Domain and White Nights both make for great family-film night viewing for families with kids old enough to cope with some serious thinking about the nature of evil.