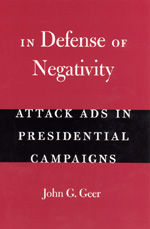 John G. Geer, has written a book defending the use of negative campaign ads. His main point seems to be that such ads are much more likely to focus on the important political issues than positive ones. He is probably right about that. The so called positive ads tend to be rather empty.

I am glad the book is out there, even if only to counteract the widespread and thoughtless repudiation of what is often called “the politics of personal destruction.” That there is such a thing, and that it is reprehensible, I don’t want to deny. But the term is bandied about way too freely and often applied to instances of political criticism that are both legitimate and important for the democratic process.

But, of course, negativity as such isn’t any more desirable than positivity as such. It all depends. I suspect that the book sheds more light on the issue than the title.

P.S. John Geer’s Attack Ad Hall of Fame collects some fun examples of the sort of ads he discusses in the book. My personal favorite is the 2004 windsurfer ad against John Kerry.

I agree that windsurfer ad is great!! Had quite a laugh seing it after all this time!

Nice to hear from you, Bill.

I think it was Voltaire who said that it is very hard to revere something after one has laughed at it (or something to that effect).  This ad proves it.  It has been hard to take Kerry seriously ever since.