Editor's note: This post was moved, with Samewise's permission, from the Member Feed.

A few notes on the book entitled The Pope and I, by Jerzy Kluger:

Before WWII, in Wadowice, Poland, two men grew up in a Catholic/Jewish neighborhood.  The most famous of these men is Karol Wojtyla, but the second is his lifelong Jewish friend, Jerzy Kluger.  Together, they spent their elementary and highschool years in Wadowice, only to meet again after the War in Rome and in very different states of life.

A widower, Captain Wojtyla (Karol's father), led the Wojtyla family's life in Wadowice.  A tailor by trade, Captain Wojtyla later served as a Polish (then Prussian) officer in WWI.  He had three children with his wife Emilia: Edmund, Olga, and Karol.  Edmund became a physician just after WWI, caught scarlet fever while treating his patients and passed away a decade before WWII.  Olga also passed away much earlier on, not more than a few days old.  That left Karol as the only remaining son of Captain Wojtyla, whose wife even passed away when Karol was nine. 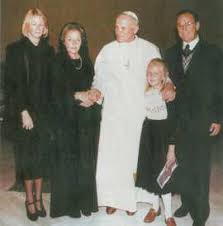 The Kluger family was a highly influential Jewish family in Wadowice.  Wilhelm Kluger was the president of the local Jewish community, and would regularly speak in the synagogue.  He had an eldest son, Jerzy (Jurek), and a daughter named Tesia.  Wealthy, well-educated, and gifted, Jerzy regularly noticed how much more advantaged he was than his friend 'Lolek' (Karol).  Here are some humorous examples:

--About skiing, "As we grew older, Lolek and I moved on to the tougher slopes around our area.  Lolek's technique was not as good as mine, and I was also afraid of his breaking my skis" (p.19)

--About ping-pong, "Lolek was also a good ping-pong player, although not as good as me, and I'd spot him ten points when we played together" (ibid).

--About soccer (and early indications of Wojtyla's deep understanding of Jewish/Catholic relations): "Usually Lolek would take his place between the goalposts...the spirit of competition was so fierce that even though he was not a Jew, Lolek showed no intention of taking it easy on the Catholics when he played goalie for the Jewish side" (p.25)

--About dancing with women:
"Lolek plunged into the action with Halina Krolikiewicz, the daughter of the principal of the boys' school.  I paired up with a girl named Olga, with blond hair and a floor-length green silk dress" (p.28)

Above are the lighthearted accounts of frienship in the book, but the two men also underwent tremendous tragedy in their lifetimes, mainly due to the Nazi take-over of Poland. The War proved to be devastating for both Kluger and Wojtyla families.  By it's end, only Wilhelm, Jurek, and Karol survived--and all apart from one another.  Wilhelm's wife, Rozalia, and daughter were both killed at Auschwitz.  And, Jerzy himself was taken with his father to a Soviet prison camp, Maryjskaja, only to be separated from him when obligated to join the Polish forces in Russia at Kara-Suu.

Without Lolek, Jerzy could have easily made the logical conclusion that all of Europe was anti-semitic, including Catholics.  Indeed, without the interactions that the Klugers had with the Wojtylas, Wilhelm would have also concluded that the entire world was against the Jewish people.  But Jerzy records a few touching stories that made a deep impression on him, and his father.

--Jerzy visits Catholic Mass, and is ridiculed by an elderly woman, only to be consoled by Lolek: "Believe me, Lolek, I didn't know Jews aren't allowed in here"...'Doesn't she know that Jews and Catholics are all children of the same God?' Lolek was barely ten years old'' (p.12)

--Lolek visits the synagogue: "I would like the Captain and Lolek to come to the synagogue on the Sabbath as well', father told me at one point.  I was immediately overjoyed, and I ran to extend the invitation to Lolek.  I thought again of what Lolek had told me a few years earlier, when I, as a Jew, had set foot in a church, and how my friend reassured me that this was not a sin, because Jews and Catholics come from the same God" (p.23)

Lastly, as I said, Jerzy and Lolek met again in two different states in life: Lolek as Pope, and Jerzy married, w/ 2 daughters, to a beautiful Irish Catholic woman.  They met regularly throughout JPII's pontificate, discussing Jewish/Catholic relations and ways of reconciling the two.  One such occasion arose when JPII got the idea to be the first Pope to attend Liturgy at the Roman synagogue:

--JPII in the Roman Synagogue: "You are our beloved brothers', he told them, 'and in a certain way, our older brothers'.  It was a phrase taken from Adam Mickiewicz, the author of Pan Tadewsz and Poland's greatest poet.  Hearing it again at the synagogue that day, I was suddenly brought back to those years before the war, and all of those old emotions welled up in me again.  When the pope finished speaking, there was again silence and prayer in the synagogue" (p.183).

Much healing took place in Jerzy Kluger's life on account of his friendship with Karol Wojtyla.  He was able to face the fear of returning to Poland, where his mother and sister had been murdered--he was able to serve as an ambassador to Israel for the Vatican--and above all, he was able to be a loyal friend to JPII on such a significant level that entire groups of people were reconciled by the sheer witness of their interactions, partnership, and love.

I enjoyed this book so much that I read it out loud to my wife, and then read it a second time to take notes!  I even promoted it in my Parish men's group as a testimony of heroism and long-suffering!

Jerzy Kluger remained a faithful Jew his entire life.  His immediate family (wife, daughters, and grandchildren) were all Catholic.  The Pope himself baptized Jurek's granddaughter with his blessing!

This stands in stark contrast to a few references to the Inquisition and forced baptisms (of Jews) in the book.  Nothing was forced in Lolek and Jurek's relationship--it was a partnership forged in suffering, good will, and solidarity that resulted in the same outcome the Inquisitors tried to  force from Jews, but without the prosetylization.

Personhood, in this sense, proved to be foundational for their friendship.  In the end, the Kluger family found the fullness of truth through personalism.

I read the book some years ago, but had forgotten these great details.  Thanks for posting, Samwise.

I've often reflected on how important friendship was in Wojtyla's life.  There is this friendship, which did so much to improve relations between Jews and Catholics, once Wojtyla was Pope, and then there was his deep friendship with women during high school and in in the Rhapsodic Theater that I'm sure opened his heart to the legimate aspirations of femininism.

It's beautiful and mysterious.