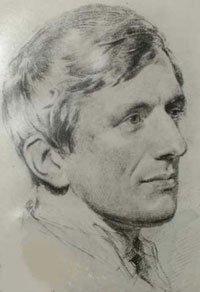 John Henry Newman (1801-1890) was educated at Oxford and was ordained a priest in the Church of England in 1822.  In 1833 there arose in the Church of England a reform movement known to history as the Oxford Movement.  From the beginning Newman was the guiding spirit of the movement, which sought to recover the apostolic and patristic roots of the Church of England.  For the 12 years of the Oxford Movement Newman was prodigiously productive as an author, writing tracts, treatises, letters, essays, sermons, and poems of great power and originality.  After some years of struggling to renew the Church of England the conviction grew on Newman that he was in fact in a schismatical church, and that the true descendant of the ancient apostolic Church was the Roman Catholic Church, which Newman joined in 1845.  He is generally regarded as the most significant Catholic convert since the Reformation.  As a Catholic he labored in behalf of Catholic education and he did much to prepare the ground in the Church for the Second Vatican Council.  He was made a cardinal by Pope Leo XIII in 1879.

Throughout his life Newman distinguished himself as a writer of incomparable expressive power; James Joyce said he was the greatest writer of English prose.  In his Anglican writings Newman is not only concerned with ecclesiastical questions; he is also concerned with the fundamentals of faith, certainty, doubt, truth, commitment.  He thus speaks to all men and women who seriously raise the religious question, and not just to Anglicans concerned with their ecclesial roots.  His concern with religious fundamentals continues in his Catholic writings, in which he explores with great penetration the sources of religious belief and unbelief.  Many religiously awakened people in our time study Newman closely and find themselves deeply nourished by his work. 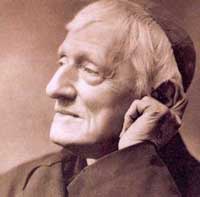 They also find in him the outlines of a profound Christian personalism, especially in what he writes about personal influence in contrast to organization, about personal judgment in contrast to formal proof, and about appealing to the heart in contrast to appealing only to the intellect.  One student of Newman put it like this: “Newman stands at the threshold of the new age as a Christian Socrates, the pioneer of a new philosophy of the individual Person and Personal Life.”  But Newman was a personalist thinker not only in subject matter of his writing, but also in the manner of his writing.  In a singular way he is personally present in his writing.  He speaks from the heart and addresses the heart, and this in a manner that has fascinated readers.  He does not just offer true propositions to the mind, but he touches the existence of those who are drawn into his orbit.