Had he lived, he would be ninety today. 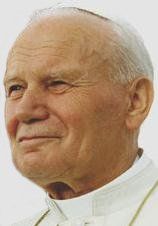 I think the Church has hardly begun to realize and assimilate the greatness of his legacy of philosophical personalism. A few favorite quotations:

From The Person: Subject and Community:

From Love and Responsibility:

A person is an objective entity, which as a definite subject has the closest contacts with the whole (external) world and is most intimately involved with it precisely because of its inwardness, its interior life.

From Theology of the Body:

… the gift reveals, so to speak, a particular characteristic of personal existence, or even of the very essence of the person. … [Alone] man does not completely realize his essence. He realizes it only by existing “with someone”—and, put even more deeply and completely, by existing “for someone.”

From The Way to Christ:

... the battle which each person—and particularly each Christian—fights for humanity and human values is the noblest of battles. It is a frontline battle, and final victory is worth the risk of some losses.

From Redeemer of Man:

From a letter to Henri de Lubac, written when he was still a Cardinal:

I devote my very rare free moments to a work that is close to my heart and devoted to the metaphysical sense and mystery of the person. It seems to me that the debate today is being played out on that level. The evil of our times consists in the first place in a kind of degradation, indeed in a pulverization, of the fundamental uniqueness of each human person. This evil is even more of the metaphysical order than of the moral order. To this disintegration planned at times by atheistic ideologies we must oppose, rather than sterile polemics, a kind of “recapitulation” of the inviolable mystery of the person.