Not everyone knows that the great civil rights leader whose legacy we honor today held a doctorate in philosophy from Boston University, intellectual home of the Boston Personalists. His activism was animated by a profound personal faith and grounded in serious study of the intellectual trends of the day.

He recounts his journey from “thorough-going liberalism” through existentialism to a Christian personalism that recognized both the reality of evil and the hope of overcoming it in an essay called Pilgrimage to Nonviolence, 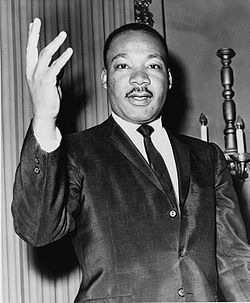 Here are two of its concluding paragraphs.

In recent months I have also become more and more convinced of the reality of a personal God. True, I have always believed in the personality of God. But in past years the idea of a personal God was little more than a metaphysical category which I found theologically and philosophically satisfying. Now it is a living reality that has been validated in the experiences of everyday life. Perhaps the suffering, frustration and agonizing moments which I have had to undergo occasionally as a result of my involvement in a difficult struggle have drawn me closer to God. Whatever the cause, God has been profoundly real to me in recent months. In the midst of outer dangers I have felt an inner calm and known resources of strength that only God could give. In many instances I have felt the power of God transforming the fatigue of despair into the buoyancy of hope.

I am convinced that the universe is under the control of a loving purpose and that in the struggle for righteousness man has cosmic companionship. Behind the harsh appearances of the world there is a benign power. To say God is personal is not to make him an object among other objects or attribute to him the finiteness and limitations of human personality; it is to take what is finest and noblest in our consciousness and affirm its perfect existence in him. It is certainly true that human personality is limited, but personality as such involves no necessary limitations. It simply means self-consciousness and self-direction. So in the truest sense of the word, God is a living God. In him there is feeling and will, responsive to the deepest yearnings of the human heart: this God both evokes and answers prayers.