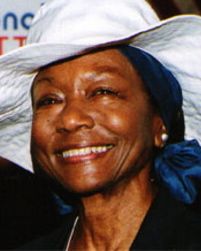 To my regret and dismay, I only learned about this wonderful person after her death in October. I would have liked to sit at her feet and be her disciple.

The first black woman to graduate from Harvard Medical School and a founder of the National Right to Life Committee, she deserves the gratitude and admiration of everyone who cherishes human life.

An article in today’s American Spectator online describes her fearless and articulate opposition to abortion:

Dr. Jefferson, a surgeon, was appalled by the 1973 decision, Roe v. Wade, which legalized abortion on demand for all nine months of pregnancy, up to the moment of birth. This decision, along with its evil twin, Doe v. Bolton, struck down all state restrictions on the practice, effectively allowing abortions in almost any circumstances including mere convenience.
Jefferson testified before Congress that these decisions “gave my profession almost unlimited license to kill.”
“With the obstetrician and mother becoming the worst enemy of the child and the pediatrician becoming the assassin for the family, the state must be enabled to protect the life of the child, born and unborn,” said the good doctor.

Note the passionate implicit personalism of her stance:

I am at once a physician, a citizen, and a woman, and I am not willing to stand aside and allow this concept of expendable human lives to turn this great land of ours into just another exclusive reservation where only the perfect, the privileged, and the planned have the right to live.

So accomplished and remarkable was she, that even The New York Times had to pay her some homage with an obituary.

See also this article at Christianity Today’s blog for women.

It’s good to think of her in heaven, being honored by God.

I met Dr. Jefferson once, briefly, at a National Right to Life conference. I did not know anything about her at the time. She was very humble and unassuming. It was in the evening in the restaurant/bar area of the hotel. A group of pro-lifers was sitting together and she was among them. If my memory serves, she simply introduced herself as “Mildred” when I and a couple friends joined the group. She didn’t even clearly say she was a doctor when I asked her about herself. I think she said something general about health care. One would have had no idea by talking to her in that setting what an accomplished woman she was, although she had a beautiful quiet dignity about her. I did not know until later when someone else told me about her what a remarkable woman she was. May she rest in peace with Jesus!