The question of what exactly an ideology is, how it functions in human life, why it appeals and how it affects us, has been with me ever since I posted about it a week or so ago. Here are some points from my reading and reflecting that I thought might interest others.

Ideologies lead to homogeneity
First, I have been reading a great and probing lecture by our friend Mark Henrie (not to be confused with Mark Henry). (Katie linked to it some weeks back; here it is again). Its central theme is ideology and conservatism’s resistance to it. According to Mark, the essence of ideology lies in its claim “to have captured the whole truth about man” and the correlative proclamation of “a universal history for all the world.” On the basis of a presumed insight into the universal nature of man, ideologies work to impose a homogeneous (and ultimately global) state.

Conservatives, he argues further, while unlikely to fall into the danger of communism, are by no means immune to the danger of ideology as such. Adherence to the ideology of individualistic liberalism, for instance, or of the unrestrained free market is widespread. The reductive and depersonalizing tendencies inherent in these ideas (if not kept in check) are becoming clear. Nowadays, for instance, the free market is often experienced as “a realm where uniform laws of rational efficiency work to the end of homogenization. Human goods such as community, solidarity, and indeed, even eccentricity…are threatened”.

The homogenizing power of liberal market logic is revealed in contemporary political arguments that speak of the necessity of “competitiveness” in international markets. While it is often claimed that modern technological production has freed humanity from nature or necessity, the unrestrained market has itself become the realm of necessity that cannot be opposed. Here it is contended that we are not free to resist the demands of market efficiency. We are not free to seek such social goods as higher environmental standards. We are not free to defend settled ways of life by protecting older domestic industries. Owing to lower wage levels brought on by a competitive labor market, women are not free to remain at home as mothers, regardless of the non-quantifiable harm to children. In short, we are not free to organize any of our social relations in a manner that will lead to production inefficiencies.

There are more worthwhile things in Mark’s lecture (for instance, on how the present encounter with Islam might hasten the end of the age of ideology by revealing the “universality of the West’s modernizing history” as a kind of “parochialism”.) But I have said more than I meant to already, and turn now to the first few pages of Vaclav Havel’s essay, “The Power of the Powerless,” which is included in this great collection of his writings. 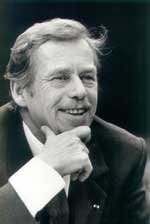 Ideologies are attractive because they provide ready answers to life’s difficult questions
Havel thinks that an ideology can be atractive because it offers ready-made answers to difficult, existential questions. It provides a coherent worldview in a confused and drifting age.

Keep in mind, while reading these excerpts, that Havel is reflecting on the communist ideology of the Soviet system. This means 1) that his remarks, while containing general insights into the nature of ideology as such, are taylored to a specific instantiation of it. And 2) he is dealing with an ideology that has been very successful in terms of being able to establish itself and maintain its grip on whole peoples, across large regions, and for a long time. As a result, essential characteristics of ideology are more thoroughly realized and clearly revealed than they would be normally.

It offers a ready answer to any question whatsoever; it can scarcely be accepted only in part, and accepting it has profound implications for human life. In an era when metaphysical and existential certainties are in a state of crisis, when people are being uprooted and alienated and are losing their sense of what this world means, this ideology inevitably has a certain hypnotic charm. To wandering humankind it offers an immediately available home: all one has to do is accept it, and suddenly everything becomes clear once more, life takes on a new meaning, and all mysteries, unanswered questions, anxiety, and loneliness vanish.

But there is a cost:

Of course, one pays dearly for this low-rent home: the price is abdication of one’s own reason, conscience, and responsibility, for an essential aspect of this ideology is the consignment of reason and conscience to a higher authority.

Our experience with ideology is more benign. But don’t we all know instances of a similar dynamic in more ordinary circumstances and in less dramatic ways? In certain religious groups, for instance, or in peer-groups?

Ideologies have an excusatory function
Havel begins section 3 of his essay by describing a greengrocer who hangs a sign in his window, “among the onions and carrots,” with the slogan: “Workers of the world, unite!” Obviously the grocer has no interest in this message at all. Why, then, does he place it in his window? Simply because he is expected to do so and wants to stay out of trouble. Havel continues,

Let us take note: if the greengrocer had been instructed to display the slogan “I am afraid and therefore unquestioningly obedient,” he would not be nearly as indifferent to its semantics, even though the statement would reflect the truth. The greengrocer would be embarrassed and ashamed to put such an unequivocal statement of his own degradation in the shop window, and quite naturally so, for he is a human being and has a sense of his own dignity… Thus the sign helps the greengrocer to conceal from himself the low foundations of his obedience, at the same time concealing the low foundations of power. It hides them behind the facade of something high. And that something is ideology.
Ideology is a specious way of relating to the world. It offers human beings the illusion of an identity, of dignity, and of morality while making it easier for them to part with them… It is a veil behind which human beings can hide their own fallen existence, their trivialization, and their adaptation to the status quo. It is an excuse that everyone can use, from the greengrocer, who conceals his fear of losing his job behind an alleged interest in the unification of the workers of the world, to the highest functionary, whose interests in staying in power can be cloaked in phrases about service to the working class.

I am sure we are all familiar with the temptation of hiding something low behind something high. For instance, instead of admitting we are afraid to do something, we tell ourselves it would be imprudent. It is when such deceptions take on a communal character, that they start to look more like an ideology. Good examples don’t come to mind right now, and its time to turn in. (As Newman said, “go to bed in good time, and you are already perfect.”) Perhaps a reader can provide an example?

Perhaps here is an example.

Among certain circles of society (educational theorists, mainstream journalists, secular psychologists, for example), there seems to be the idea that disciplining a child to constrain their behavior to the moral norms of others (parents, for one) is somehow to diminish the child’s freedom.

So, what I would suggest may be happening here is that some circles of adults are hiding the lower thing (avoiding the psychic pain they experience personally when disciplining their children) with the higher thing (safeguarding the freedom of their children).

However, the higher is a ruse, perhaps even to themselves. In truth they are not promoting authentic freedom. But so long as they think they are, they can avoid altogether the lower and closer-to-reality issue of their own avoidance of the suffering that inevitably comes along with the disciplinary aspects of good parenting.

Do all Americans buy into this? I don’t think so. But, many do, especially among some subcultures of educated and successful (in the eyes of the world) people. Enough, I think, to qualify as an ideology. Perhaps it could be called something like the “discipline the child, frustrate his freedom” ideology.