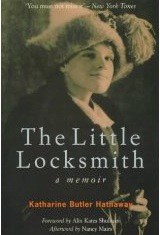 I am reading an extraordinarily touching and beautiful book, loaned to me by my friend Janene, called The Little Locksmith. It is the memoir of a woman born in Massachusetts to a happy, loving, bourgeois family at the end of the 19th century. In childhood she developed tuberculosis of the spine and was forced to spend ten years flat on her back in bed. When she finally arose, she found she had a hunchback. She also had all the spiritual sensitivity of the true artist, honed by suffering.
The whole thing is full of personalist resonance. And just now I came to a passage that seems to me to throw some light on the discussion of prudishness we had below. The quote is long, but so lovely and rich in perception I don’t think you’ll mind. In it, she has just emerged from a deep and long depression stemming (she later realized) from intense loneliness and “sexual starvation.” (She uses that term not to indicate a mere physical urge and need, but rather a soul-sickening yearning for love.) She writes at a time of dramatically changing social mores. It was the end of the Victorian era.

The great war between mothers and daughters was then only just beginning, and I was one of its most passionate fighters on the side of the captives. My friends probably thought of me as being much wiser than I really was partly because, as a partisan of the wistful daughters, I was always reiterating my belief that every human being must fulfill his or her own destiny. It must have been for these two reasons that my friends who were hesitating on the brink asked for my advice. They knew that I would be sure to give them the advice they wanted—that which was contrary to the world’s and to their New England consciences. They knew I would urge them to go ahead and risk everything.

I did urge them. For my conception of love was that it was merely another form of man’s assertion which he makes in every work of art, that life is not ordinary. I was a fanatic in my belief that life is not ordinary, and in my hatred for all the acts, manners, talk, and jokes which treat the mystery of life as if it were comic and obscene, to be handled with contempt and laughed at or kicked around like an old rag. I believed that the experience of being born, of living, and of dying was all a poem, and that it should be received—all of it, every part of it—with wonder and gratitude. I thought that love was a power, like the artist’s, which suddenly gave to a man and woman together the sense of wonder. When I saw a man and a woman in love regarding each other with an intense awareness of each other’s mystery and preciousness I believed that those two had for the time being cast off the corruptions of ordinariness which makes most people blind to the miracle of existence. I believed that their sudden vision was like a saint’s or an artist’s vision. And I knew that when two unextraordinary people are in this state their happiness is in great danger. It is new to them and they do not know how to hide it and protect it from its enemies, and therefore it is in grave peril at the hands of those traditional enemies of the ones who see visions, those members of society who make and enforce they rules which are hostile to anything they themselves cannot understand, and who take upon themselves the right ot treat the most sacred experiences in the manner of the police court. Whenever I heard or read in the newspapers about some poor devil of a hard-working respectable bank clerk or businessman whose career was suddenly ruined by the astounding discovery that he was keeping a mistress, I always used to imagine that he was a man who was merely trying to find for himself some reassurance that life is not ordinary—some escape from an existence that had been made intolerably unmiraculous for him by a prosaic wife. Most lives, I thought, lacking art, lacking religion, were choked and suffocated by the continual insistence of the personal, and of all its wearying insistent paraphernalia. I thought that husbands whose lives were so choked and suffocated with too much boredom and talk and anxiety and struggle wanted only a chance to worship love in the abstract, as it could be represented for them by an unknown woman or an anonymous girl in the darkness of an unfamiliar room. For this reason I believed that even prostitution should be regarded not as something evil, but as a sacred ritual as necessary for human beings as books and music and paintings are. I felt that my old favorite magic of transformation could show that it can be a good service just as easily as it can be a profane one.

Now, obviously I find her conclusion deplorable and her reasoning full of errors and problems. She projects her own romantic sensibility and poetry onto everyone else, overlooking the fact that sexual affairs (not to mention prostitution) can also be banal and prosaic and much worse than that. They might have nothing to do with love. Further, I find the whole notion of “love in the abstract” almost an oxymoron. But still, I understand what she means. And I think it may come close to what Christopher West has in mind when he speaks of prudishness.

Wow, Katie. I like Katharine Hathaway‚Äôs fiery spirit and dissatisfaction with the bland.
I agree with what her poignant complaints, but wish she came up with equally striking solutions.
Could the antidote for prudery, ordinariness, sterility be truth and love? I‚Äôve been reading your quotes from Pope Benny‚Äôs encyclical which put me in mind of the amazing challenge of truth and love.
Jesus, the Man, doesn’t strike me as being plagued by prudishness, though he was Himself the New Law. He constantly perplexed the standard of his day (healing on the Sabbath, dining with tax collectors and prostitutes, befriending women.) His way, Truth and Love, was such a complete answer to all the quarrels about rules and regulations. He wasn‚Äôt permissive but he was free. Free from solving things with set, easy answers. Hathaway (in this instance) and Heffner, answer the challenge of life being lowered to the humdrum with answers that aim for the solution, but turn into other problems and new humdrums.
Those that want to fit life and love into neat packages fail to solve and create new problems as well.
True love (in all of its arenas, not just romantic) is so absolutely brilliant, a person must struggle with blood, sweat, and tears when faced with it. Saints and artists run themselves ragged in dealing with it. It consumes them and they don‚Äôt have many followers, or at least people that want to sell all and be like them, and they often hang for it.
They are misunderstood, misjudged, mistreated all because they grapple with truth and love which is much bigger and messier than the ordinary.
It is so much easier to solve the fluid challenges of love and truth with a rigid damn or by caving in to its flood. Somehow, mysteriously, Jesus is able to balance on water. Life presents us with a constant flow of situations that require an honest grappling with love and truth. We most often fall short of choosing the hard way and look for inadequate short cuts which require much less of us.

Joan, I agree with everything you say, and say beautifully, so that I see it in new ways.
What interests me so much about KBH was that she was deeply sensitive and religious herself, and that she hated the moral conventions of her society precisely because she saw them as interfering with and blocking our experience of deeper truths‚Äîtruths about the mystery and beauty and abundance of life.
From that point of view she’s a million miles above Hugh Hefner, who seems to have rejected religion and mystery in favor of pleasure and self-indulgence.
But all this goes to show again the greatness of John Paul II and DvH: their ability to rescue the joy and passion and poetry and power and meaningfulness and adventure of conjugal love in a way that was not reactionary but transcendent to the cultural climate of the age.
How blessed we are to be married after them!

Katie, I shouldn’t have used Hathaway’s name and Heffner in the same sentence because they are world’s different. I don’t see any value in Heffner’s work and I see great value in Hathaway’s.
I understand what she was getting at, and I am tempted to think in a reactionary way like her. I can think of many artists that have the same sensitivity and hunger for beauty who have ended up becoming slaves in their attempts to find it. I am grateful to my dear Savior who‚Äôs spared me from taking dangerous roads in my pursuit of beauty and poetry, but rather has led me to a large fullness where there is an unlimited supply. I guess what I‚Äôm saying is living a moral and generous life (as opposed to a self consumed one) is compatible with living a life filled with joy, poetry, passion, and beauty.
The hunger for all that is beautiful is so much a part of our inheritance as human beings that to stuff it distorts our personhood. You‚Äôre so right. JPII and DvH have shown us fine tuned ways to rescue and reconcile the flower of life as well as the nuts and bolts. The marriage of the two is so important, one without the other doesn‚Äôt work. They compliment each other.
To say that living a life filled with joy and poetry is compatible with living a moral and generous life (as I said above) seems so obvious and yet not obvious.
Hathaway‚Äôs complaint, ‚Äúthose members of society who make and enforce rules which are hostile to anything they themselves cannot understand, and who take upon themselves the right to treat the most sacred experiences in the manner of the police court‚Äù is a valid one. But those members of society who promise, do your own thing and you’ll be happy aren’t hitting the answer either.
How do we live with rules and not get squished by them. How do we live the spirit of the law and not the letter of the law without rejecting the liberating benefit of having law? I daresay it is very very hard.
I believe deeply in the poetry of life and that it is part of our dignity. Our hearts cry out in unstuffable symptoms for Life with a capital L.
We need a Savior!

When I was driving around today, I was thinking the same thought. We do need all those witnesses
and disciplines to make the truth take shape, to make the truth clear, and to fight the onslought of half truths.