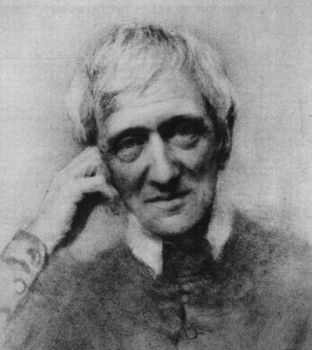 October 9th is the anniversary of the day in 1845 when Newman entered the Catholic Church, “the one true fold.”

Looking for something to post in honor of the occasion, I read just now for the first time a remembrance of Newman by J.A. Froude, brother of Newman’s close friend, Hurrell. It’s more than worth reading in full, and I won’t resist quoting it at length. For me it evokes Newman exactly as I have encountered him imaginatively, reading his works and reading about his life, and through beseeching his intercession as a friend in heaven.

When I entered at Oxford, John Henry Newman was beginning to be famous. The responsible authorities were watching him with anxiety; clever men were looking with interest and curiosity on the apparition among them of one of those persons of indisputable genius who was likely to make a mark upon his time. His appearance was striking. He was above the middle height, slight and spare. His head was large, his face remarkably like that of Julius Cæsar. The forehead, the shape of the ears and nose, were almost the same. The lines of the mouth were very peculiar, and I should say exactly the same. I have often thought of the resemblance, and believed that it extended to the temperament. In both there was an original force of character which refused to be moulded by circumstances, which was to make its own way, and become a power in the world; a clearness of intellectual perception, a disdain for conventionalities, a temper imperious and wilful, but along with it a most attaching gentleness, sweetness, singleness of heart and purpose. Both were formed by nature to command others; both had the faculty of attracting to themselves the passionate devotion of their friends and followers; and in both cases, too, perhaps the devotion was rather due to the personal ascendency of the leader than to the cause which he represented. It was Cæsar, not the principle of the empire, which overthrew Pompey and the constitution. Credo in Newmannum was a common phrase at Oxford, and is still unconsciously the faith of nine-tenths of the English converts to Rome.

He captures two particularly striking features of Newman: his originality and the intense reality of his faith.

...No one was more essentially tender-hearted. But he took the usually accepted Christian account of man and his destiny to be literally true, and the terrible character of it weighed upon him.

I had then never seen so impressive a person. I met him now and then in private; I attended his church and heard him preach Sunday after Sunday; he is supposed to have been insidious, to have led his disciples on to conclusions to which he designed to bring them, while his purpose was carefully veiled. He was, on the contrary, the most transparent of men. He told us what he believed to be true. He did not know where it would carry him. No one who has ever risen to any great height in this world refuses to move till he knows where he is going. He is impelled in each step which he takes by a force within himself. He satisfies himself only that the step is a right one, and he leaves the rest to Providence. Newman’s mind was world-wide. He was interested in everything which was going on in science, in politics, in literature. Nothing was too large for him, nothing too trivial, if it threw light upon the central question, what man really was, and what was his destiny…

Listen to what Froude says of Newman’s sermons of the day.

The hearts of men vibrate in answer to one another like the strings of musical instruments. These sermons were, I suppose, the records of Newman’s own mental experience. They appear to me to be the outcome of continued meditation upon his fellow-creatures and their position in this world; their awful responsibilities; the mystery of their nature, strangely mixed of good and evil, of strength and weakness. A tone, not of fear, but of infinite pity runs through them all, and along with it a resolution to look facts in the face; not to fly to evasive generalities about infinite mercy and benevolence, but to examine what revelation really has added to our knowledge, either of what we are or of what lies before us.

Blessed John Henry Newman, pray for us. Pray for the Church.