On this day in 1845, John Henry Newman conformed to the Church of Rome at Littlemore. 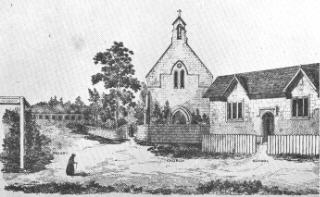 These items taken from his private correspondence (and later published in his Apologia Pro Vita Sua) in the months leading up to his conversion show Newman’s profound personalism, and his intense suffering:

In January, to an Anglican woman on the same journey:

This I am sure of, that nothing but a simple, direct call of duty is a warrant for any one leaving our Church; no preference of another Church, no delight in its services, no hope of greater religious advancement in it, no indignation, no disgust, at the persons and things, among which we may find ourselves in the Church of England. The simple question is, Can I (it is personal, not whether another, but can I) be saved in the English Church? am I in safety, were I to die tonight? Is it a mortal sin in me, not joining another communion?

In April, to his friend Church:

... Accept this apology, my dear Church, and forgive me. As I say so, tears come into my eyes;—that arises from the accident of this time, when I am giving up so much I love. Just now I have been overset by James Mozley’s article in the Remembrancer; yet really, my dear Church, I have never for an instant had {233} even the temptation of repenting my leaving Oxford. The feeling of repentance has not even come into my mind. How could it? How could I remain at St. Mary’s a hypocrite? how could I be answerable for souls, (and life so uncertain,) with the convictions, or at least persuasions, which I had upon me? It is indeed a responsibility to act as I am doing; and I feel His hand heavy on me without intermission, who is all Wisdom and Love, so that my heart and mind are tired out, just as the limbs might be from a load on one’s back. That sort of dull aching pain is mine; but my responsibility really is nothing to what it would be, to be answerable for souls, for confiding loving souls, in the English Church, with my convictions. My love to Marriott, and save me the pain of sending him a line.”

His account of his journey concludes (when he left his home at Littlemore, near Oxford, a few months later) with almost unbearable poignancy:

“January 20, 1846. You may think how lonely I am. ‘Obliviscere populum tuum et domum patris tui,’ has been in my ears for the last twelve hours. I realize more that we are leaving Littlemore, and it is like going on the open sea.”

I left Oxford for good on Monday, February 23, 1846. On the Saturday and Sunday before, I was in my house at Littlemore simply by myself, as I had been for the first day or two when I had originally taken possession of it. I slept on Sunday night at my dear friend’s, Mr. Johnson’s, at the Observatory. Various friends came to see the last of me; Mr. Copeland, Mr. Church, Mr. Buckle, Mr. Pattison, and Mr. Lewis. Dr. Pusey too came up to take leave of me; and I called on Dr. Ogle, one of my very oldest friends, for he was my private Tutor, when I was an Undergraduate. In him I took leave of my first College, Trinity, which was so dear to me, and which held on its foundation so many who had been kind to me both when I was a boy, and all through my Oxford life. Trinity had never been unkind to me. There used to be much snapdragon growing on the walls opposite my freshman’s rooms there, and I had for years taken it as the emblem of my own perpetual residence even unto death in my University.

It is good to think of him now, in Reality, where everything true and good converges.