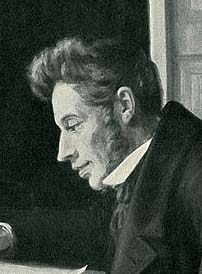 Søren Kierkegaard (1813-1855) was born in Copenhagen, Denmark and rarely left his native land (four trips to Berlin, one to Sweden). He wittily described himself as the greatest philosopher in Denmark. He was a critic of idealistic philosophy, especially that of Hegel, as well as of the state of Christianity in his time. He is considered to be the father of the existentialist movement in philosophy. Existentialism stresses the importance of the decision of each person in his freedom and power.

After exposure to Hegel's philosophy early in his career, Kierkegaard reacted strongly against it, influencing the bent of his thought for the rest of his life. He regularly used irony and wit to make fun of the figure of a "worshipful Herr Professor" who has spent so much time building an abstract system of explanation for all of reality that he has forgotten that he himself is an individual responsible for his own life before God and not just "a fantastic three-eighths of a paragraph" within his own system. Thus Kierkegaard stresses the subjective development of the individual as a constant theme and attacks the importance of objectivity in thought. This leaves him open to the charge of irrationality and indeed some later philosophers of the absurd (e.g., Sartre) trace themselves back to Kierkegaard. However, Kierkegaard can more appropriately be seen as attacking an overweening modern rationalism rather than reason itself. He is much more an opponent of Hegel than of Thomas Aquinas. In that light, he can be seen as a breath of fresh air within the modern tradition, even recapturing classical wisdom. For example, as opposed to Sartre, Kierkegaard in The Sickness Unto Death clearly asserts that man has an essence—he does not create his own essence—which he must discover through experience and faith and then use his freedom to strive for fulfillment. Man's essence is paradoxical, with dimensions both in time and in eternity, and can only be fulfilled by discovering the truth about one's God-relationship. A man discovers what it means to be a person (this particular individual) only when he discovers that he comes from and is called to give himself back to God. 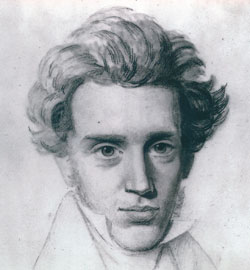 Kierkegaard stresses that each individual must take responsibility for his own freedom and his own unfolding being. He contrasts this ethical and religious maturity to being lost in the crowd or merely drifting along with societal expectations. Even where social habit and pressure are good (e.g., in the direction of or in support of Christianity), if individuals only follow along out of habit or social pressure they are not authentic or genuine. Thus near the end of his life Kierkegaard unleashed what has become known as his "attack upon Christendom" in which he castigated the Danish State Lutheran Church for its complacency. Once again, parallel to the way his attack on rationalism is sometimes interpreted as a rejection of reason itself, this religious assault has been used as ammunition against Christianity itself by atheists and free-thinkers, though by Kierkegaard's own confession in The Point of View of my Work as an Author every word he wrote was for the purpose of making men more deeply Christian. He writes to each single individual as that individual stands alone before God.

Thus Kierkegaard's thought is open to widely different interpretations, partly because he at times goes to extremes, partly because he himself hid behind pseudonyms in many of his published works. As a child, he and his father used to act out entire dialogical arguments as if they were two other people. Kierkegaard later wrote books in this manner—as if he were someone else holding a particular worldview and expressing it. Two of his first large works were Either/Or, the first written from the point of view of a young man living for the pleasures of the moment (what Kierkegaard calls the "aesthetic" stage), the second an answer to the first supposedly from a middle-aged, married man living in the midst life-long responsible commitment (the "ethical" stage). Kierkegaard, of course, wrote both. He also includes, by means of a sermon (or "edifying discourse) under his own name, a hint at his third stage (the "religious" stage) wherein one discovers one's God-relationship and relation to eternity, not merely to time. Kierkegaard thinks the individual has to crash on the rocks of despair over the limits of mere earthly pleasure and even the limits of mere earthly commitments before he can authentically enter the religious stage.

Kierkegaard is widely known, from Fear and Trembling (in which he dramatically analyzes Yahweh's command to Abraham to sacrifice Isaac), for what he calls "the teleological suspension of the ethical." This would seem to imply a voluntarism in God, putting the entire ethical law in a merely conditional status, dependent solely on God's will rather than being grounded in His essence. Further, if you drop God and faith out of the equation, as later atheistic existentialists do, then any objective ethics becomes even more lacking in foundation. Thus we see here dangerous possibilities in Kierkegaardian interpretation. Nonetheless, Fear and Trembling is a very early work of Kierkegaard (1843, just after Either/Or), is written under a pseudonym (which means, according to The Point of View of My Work as an Author, that it is not necessarily representative of the authors own position), and its position on the ethical in relation to the religious is contradicted by many later works of Kierkegaard which depict a much closer interpenetration of the ethical and the religious ("the ethical is the breath of the eternal"). So again an interpretation is possible here which is much more in line with classical philosophy and natural law ethics.

Kierkegaard lived through the periods of despair, anxiety, dread, fear and trembling about which he writes. He overcame a despair over his spiritual state and sins through two conversion experiences, one in 1838, the next in 1848. In the first, he says that he realized that his sins were forgiven, but he still dreaded the consequences of his sins. In the second, he says he realized that not only were his sins forgiven, but forgotten. After this experience in 1848, he began to be more open in his writings and ceased the use of pseudonyms. Kierkegaard eventually seemed to achieve a complete openness and trust in God, the God who entered time to save us on the cross, but he had an ongoing problem with openness to human beings. He was engaged once, to Regina Olsen; however, though he loved her dearly, he decided to break the engagement (1840-41), provoking great crisis within. It is not clearly known exactly why he broke the engagement—was it for physical, psychological-emotional, or spiritual reasons?—because Kierkegaard carefully went back through all his journals and diaries and cut out the paragraphs that described his motives here. He said that he knew that later generations would pore over his papers and that he wanted to keep certain things private. He does say at one point that if he had had more faith, he would have married Regina. Kierkegaard is a great Christian believer and personalist thinker, possessed of deep psychological acumen, critic of the modern age, witty, intriguing, inspirational, and problematic.