There's a bit of dialogue floating around Facebook these days, linked from imgur, on the differing ways men and women experience sexual validation and objectification. Summarizing and simplifying a great deal, the basic thesis is that men don't understand complaints about sexual objectification because they themselves so rarely experience (and, the theory goes, thus crave) sexual validation. 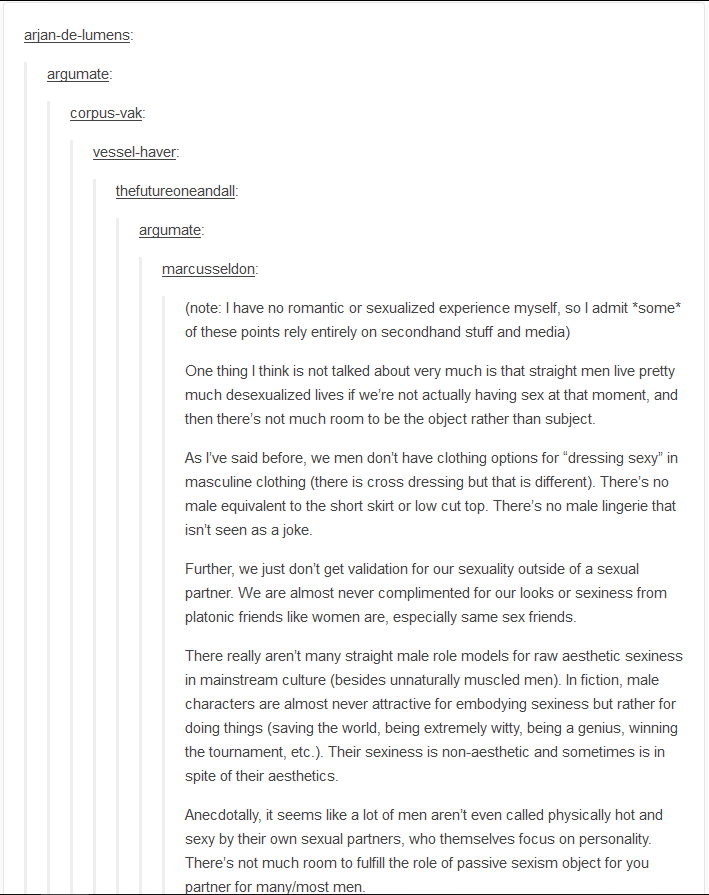 What caught my eye was the language used and the assumptions it reveals. "There's not much room to be the object rather than the subject" says the original post. "We don't talk about how...straight men are desexualized and denied the ability to be sexualized object[s]."

While I was still trying to put my finger on the root intuitions involved in this complaint, a FB commenter made a revealing remark:

"I have to wonder if this desirability/usefulness dichotomy is at play. A man who can't believe he's desirable for anything but his utility also can't help but be threatened by the notion that women don't need him. We've got a bunch of men out there whose self-esteem and notion of their own place in relationships is all predicated on the "breadwinner" model, being shown a picture of femininity where the woman can be both beautiful/desirable and powerful/useful, without any complementary picture of masculinity as anything other than the latter, and finding that picture distressing for reasons they can't fully admit even to themselves."

Once I realized that this (male) commenter had translated "sexual object" as "beautiful/desirable," something clicked. As a woman, I've had a lifetime of trying to suss out the difference between "beautiful" and "sexually desirable": two terms that are frequently, incessantly used interchangeably, but which can represent very different experiences. Even women who don't want to be sexual objects might aspire to beauty.

I think maybe what both men and women crave—the better men, anyway—when they say they want to be desirable is the sense that they have value for something innate to themselves, rather than for their utility. And it's easy to look at sexual desirability as being something like that—something innate, something people just want to be around, that doesn't have to be worked for or earned, that makes people value you for yourself.

It gets very convoluted because "beauty" and "desirability" get mixed up together, but if you think about what is being said when someone is called "desirable"—that's a transitive verb. You aren't just "desirable," you are desirable TO someone. It's not a value held in yourself, it is a value assigned to you according to what you offer the other. As is "utility." I think desirability is really just a subset of utility--or maybe utility is a subset of desirability. It's not really very different to be desired for your utility or to have utility as an object of desire.

In this way, there really isn't a "desirability/usefulness" dichotomy. They are variants on the same theme. Having utility because of your perceived "market worth" is utility. Desiring to have a mate that others recognize as a "good catch" because of her perceived sexual value or his perceived earning potential reduces the person to a possession in either case.

But, like I said, it's confusing because we don't have a way to distinguish being valued and esteemed for your person from this objectifying kind of desire. Outside of the philosophical circles, we don't have good ways to talk about the different between good-for-us and good-in-itself. Beautiful people have an aesthetic appeal that can be about more than possession and use (although it can be degraded to use). So do graceful people, and courageous people, and humble people, and kind people, and honest people. These qualities are attractive because they are good-in-themselves, and that kind of good calls for a response from us.

I think my commenter is probably right that the shift in women's roles over the last century has left many men off-balance. He describes a simplistic utilitarian arrangement--but it is an understandable one, and there is security in feeling that you understand your role, what you have to offer and what you are owed in return. The suffragist and feminist projects upset that understandable exchange, one that also included other domestic forms of use and exchange in child rearing, housekeeping, and social obligations.

Flipping through Netflix recently, my kids and I wound up watching a handful of episodes of the slightly satirical show, "Barbie: Life in the Dream House." One episode poked fun at how Barbie has had hundreds of careers over her history, but Ken's primary role is as her boyfriend. She is both breadwinner and sexual ideal; Ken serves a purely ancillary role based on how helpful he is to her. The relationship is clearly unbalanced, and the show has some fun with that.

Funny or not, it does satirize this experience of modern relationships as being out of balance. I can't regret the gains made for women over the last century, but I think it is important to recognize how this perceived imbalance in modern relationships fuels both reactionary responses and the sort of searching for new sources of utilitarian value seen in the imgur discussion. We need to present the case for a new, non-utility based way of relating to one another, men and women.

The way forward must be to shed utilitarianism in relationships, to value the person as being good-in-him/herself...and I'm worried because I feel like our society is increasingly losing the vocabulary and the incentive to see anything at all as good-in-itself outside of its utility to us.

It's not an easy task to attempt to counteract this trend. We must bear witness in our lives and our words to the conviction that it is entirely reasonable to dedicate oneself to a lifetime of knowing/loving one single person in a particular way, knowing we'll likely fall into all the errors lovers are prone to at one point or another, but confident that the goodness of the other justifies the attempt. Just as the good of your own person—your own incommunicable subjectivity—is itself worthy of the attempt, apart from your immediate utility to any other person.