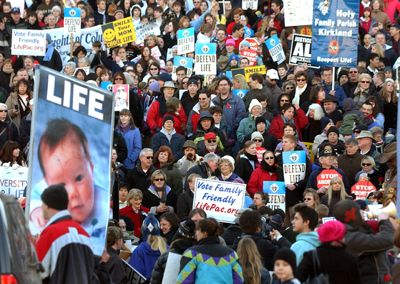 Three of our children joined scores of thousands of other Americans at the annual March for Life in Washington DC today. I am marking the occasion by re-reading John Paul II’s great encyclical Evangelium Vitae,—a text that can be taken as a kind of manifesto for the Personalist Project.

These lines, taken from Vatican II, capture well what we oppose and why.

Whatever is opposed to life itself, such as any type of murder, genocide, abortion, euthanasia, or wilful self-destruction, whatever violates the integrity of the human person, such as mutilation, torments inflicted on body or mind, attempts to coerce the will itself; whatever insults human dignity, such as subhuman living conditions, arbitrary imprisonment, deportation, slavery, prostitution, the selling of women and children; as well as disgraceful working conditions, where people are treated as mere instruments of gain rather than as free and responsible persons; all these things and others like them are infamies indeed. They poison human society, and they do more harm to those who practise them than to those who suffer from the injury. Moreover, they are a supreme dishonour to the Creator

.
And here the Pope expresses our fundamental aim and our deepest conviction:

a precise and vigorous reaffirmation of the value of human life and its inviolability, and at the same time a pressing appeal addressed to each and every person… respect, protect, love and serve life, every human life! Only in this direction will [we] find justice, development, true freedom, peace and happiness!