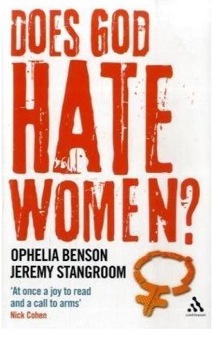 A New Statesman review of a book by public atheists Ophelia Benson and Jeremy Stangroom titled, Does God Hate Women? rivals Obama’s best in moral equivalency and obfuscation. It also appears to be inexcusably ignorant of Catholic teaching and ethos.

For instance, take this:

The first – especially beloved of the Vatican and Islamists – is that women are not being treated worse, just “differently”. They claim that it accords a woman special “dignity” to trap her in the home. But this is an abuse of language. As the authors note: “Permanent consignment to a limited and lesser role in the world is not what ‘dignity’ is generally understood to mean . . . The smallness and intimacy and relatedness of home are fine things, but not if one is confined to them permanently.”

Both Islam and Catholicism, you see, “confine” women to their homes. Now consider this passage from John Paul II’s Letter to Women:

Thank you, women who work! You are present and active in every area of life-social, economic, cultural, artistic and political. In this way you make an indispensable contribution to the growth of a culture which unites reason and feeling, to a model of life ever open to the sense of “mystery”, to the establishment of economic and political structures ever more worthy of humanity.

3. I know of course that simply saying thank you is not enough. Unfortunately, we are heirs to a history which has conditioned us to a remarkable extent. In every time and place, this conditioning has been an obstacle to the progress of women. Women’s dignity has often been unacknowledged and their prerogatives misrepresented; they have often been relegated to the margins of society and even reduced to servitude. This has prevented women from truly being themselves and it has resulted in a spiritual impoverishment of humanity. Certainly it is no easy task to assign the blame for this, considering the many kinds of cultural conditioning which down the centuries have shaped ways of thinking and acting. And if objective blame, especially in particular historical contexts, has belonged to not just a few members of the Church, for this I am truly sorry. May this regret be transformed, on the part of the whole Church, into a renewed commitment of fidelity to the Gospel vision. When it comes to setting women free from every kind of exploitation and domination, the Gospel contains an ever relevant message which goes back to the attitude of Jesus Christ himself. Transcending the established norms of his own culture, Jesus treated women with openness, respect, acceptance and tenderness. In this way he honoured the dignity which women have always possessed according to God’s plan and in his love. As we look to Christ at the end of this Second Millennium, it is natural to ask ourselves: how much of his message has been heard and acted upon?

Yes, it is time to examine the past with courage, to assign responsibility where it is due in a review of the long history of humanity. Women have contributed to that history as much as men and, more often than not, they did so in much more difficult conditions. I think particularly of those women who loved culture and art, and devoted their lives to them in spite of the fact that they were frequently at a disadvantage from the start, excluded from equal educational opportunities, underestimated, ignored and not given credit for their intellectual contributions. Sadly, very little of women’s achievements in history can be registered by the science of history. But even though time may have buried the documentary evidence of those achievements, their beneficent influence can be felt as a force which has shaped the lives of successive generations, right up to our own. To this great, immense feminine “tradition” humanity owes a debt which can never be repaid. Yet how many women have been and continue to be valued more for their physical appearance than for their skill, their professionalism, their intellectual abilities, their deep sensitivity; in a word, the very dignity of their being!

But, as they say, read the whole thing.