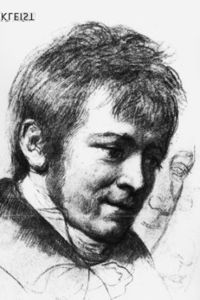 A Barnes and Noble review of a new collection of Heinrich von Kleist’s prose ends with a paragraph that succinctly captures a salient feature of modernity.

Fifty years ago, Martin Greenberg tried to determine the particular quality that gives Kleist his startling modernity. He pointed, finally, to “the questionableness at the heart of his world, the almost diabolical ambiguity of its atmosphere, the way things tremble and shift and make one wonder if they are what they seem.” In essence, Kleist consistently subverts our expectations. Like the earthquake in Chile, his fiction causes the apparently solid ground beneath our feet to shudder, crack, and, finally, give way.

I know von Kleist’s name from the story I often heard told in philosophy classes on Kant’s epistemology: that this great 19th century German poet, playwright and story-teller was so appalled by Kan’t theory that the human mind cannot attain objective reality that he committed suicide.

Being an artist of exceptional sensitivity, Von Kleist no doubt felt sooner and suffered more from the spiritual malaise that afflicts the modern world. His despair is negative testimony to the human need for truth, certainty, the metaphysical stability and inherent meaningfulness of reality.

Here is a contrasting sense of reality from Edith Stein, who, as a woman who went from being a Jewish German atheist to Catholic Carmelite nun eventually gassed to death in Auschwitz, knew as much von Kleist about the ambiguities of the modern world.

In the knowledge that being holds me, I rest securely. This security, however, is not self-assurance of one who under her own power stands on firm ground, but rather the sweet and blissful security of the child that is lifted up and carried by a strong arm.